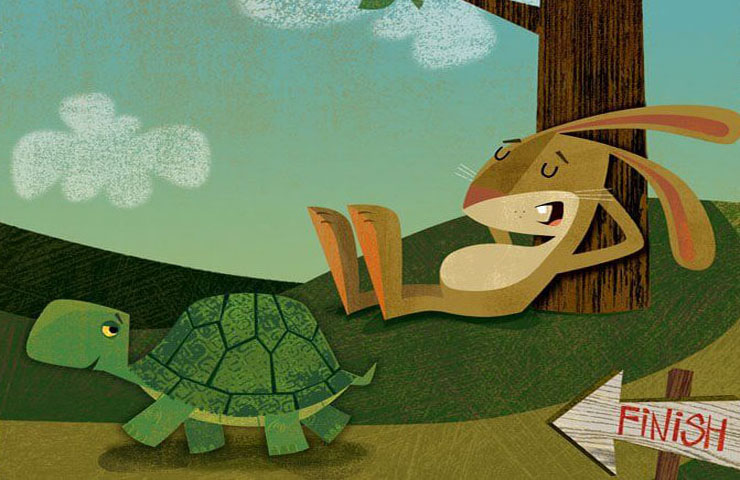 We have all heard the story from Aesop’s Fables of the race between the Tortoise and the Hare.  After racing to build a large lead the Hare got cocky and lied down to sleep. While snoozing, the Tortoise, who just kept plodding along without break, passed him and eventually won the race. Mr. Hare was awakened by the voices of those cheering the Turtle’s victory. After discovering his loss, the Hare forever reminded himself,

“Don’t brag about your lightning pace, for Slow and Steady won the race!”

What investing lessons can we learn from a fable that is over 2,500 years old?

“Slow and Steady won the race”

If you direct your retirement using the philosophy of the Hare, you are definitely running a risk. Right now the “speedy” riches of Bitcoin seem to be all the rage. While it’s true you may hit a home run, you could also be awakened by the roar of the crowd; only to find yourself winning 2nd in a two man race. Although this new investment initially rose from $1,000 to over $18,000, an enormous increase, it has crashed to around $8,000. That kind of fluctuation would seem to be quite a gamble.

When it comes to building a fund you plan on using as retirement income, you may want to be on Team Tortoise: Slow and Steady.

The returns from steady, safe investments can be deceivingly lucrative.

These types of investments have can have great protection and security while Bitcoin has neither. In fact, $75 million in Bitcoin was stolen in early December 2017.

If this person had invested their $175,000 at 12% over the remaining 10 years until their retirement they would have had $570,000. Now if they invested that in the same investment and only took out the interest he would have $68,000 per year without touching the principle. That is quite a victory for Team Tortoise.

Our Check Book IRA and the Check Book Solo 401(k) give you control. However we must use it wisely.

So when dealing with money that NEEDS to provide retirement income, you might want to be the Tortoise and NOT the Hare.

“Slow and Steady won the race”