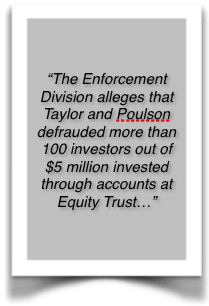 Many of our Clients have come to us as refugees from Equity Trust and Sterling Trust.

Washington D.C., June 16, 2015 —The Securities and Exchange Commission today announced charges against an Ohio-based self-directed IRA provider accused of ignoring red flags for accounts with investments that turned out to be fraudulent.

The SEC Enforcement Division alleges that Equity Trust Company took an active role in marketing investments offered by Ephren Taylor, who targeted churchgoers while running a Ponzi scheme, and Randy Poulson, who has been indicted in federal district court for an alleged offering fraud targeting investors in New Jersey.  The Enforcement Division alleges that Taylor and Poulson defrauded more than 100 investors out of $5 million invested through accounts at Equity Trust, and that Equity Trust was a cause of violations of Section 17(a) of the Securities Act of 1933 by Taylor and Poulson.

“We allege that Equity Trust failed to protect the interests of its customers when it acted as more than a passive custodian,” said Andrew J. Ceresney, Director of the SEC’s Division of Enforcement.  “When custodians like Equity Trust are aware of red flags suggesting an
ongoing fraud, they must take action to try to prevent it.”

In its order instituting proceedings, the Enforcement Division alleges among other things:

The matter will be scheduled for a public hearing before an administrative law judge for proceedings to adjudicate the Enforcement Division’s allegations and determine what, if any, remedial actions are appropriate.

The SEC’s investigation was conducted by Andrew Dean and Lara Shalov Mehraban in the New York Regional Office and Luke Fitzgerald in the Asset Management Unit.  The case was supervised by Julie M. Riewe and Amelia A. Cottrell, and the SEC’s litigation will be led by Mr. Dean, Mr. Fitzgerald, and David Stoelting.  The SEC appreciates the assistance of the U.S. Attorney’s Office for the District of New Jersey, the U.S. Attorney’s Office for the Northern District of Georgia, the Federal Bureau of Investigation, and the U.S. Secret Service.